VCS Response to COVID-19: For the latest information, please visit our COVID-19 website for updates.

A Biblical view of equity, diversity, inclusion, and belonging.

On June 24, 2021 our Board adopted a Biblical Unity statement which is the only means of achieving biblical diversity, equity, and inclusion which can be read in our Philosophy of Christian Education. This statement can be summed up into seven principles.

To respect, value and celebrate all people on our campus. 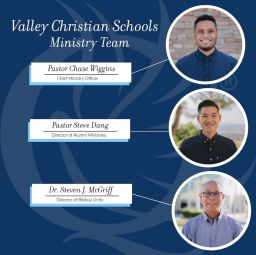 Please get to know our Valley Christian Schools Ministry Team! Last year we introduced you to Pastor Chase Wiggins as our Chief Ministry Officer. This year, we'd like to introduce you to two new team members, Pastor Steve Dang, our Director of Alumni Ministries, and Dr. Steven J. McGriff, our Director of Biblical Unity. View the full article. 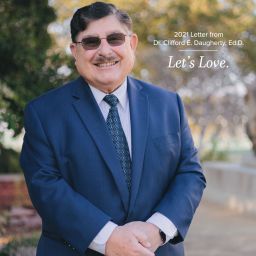 Valley's President and the VCS Board want to update everyone regarding the hiring of a school-wide diversity director.

Dr. Steven McGriff is the inaugural Director of Biblical Unity at Valley Christian Schools appointed to nurture and model a diverse, informed, loving, and unified education community. He will facilitate groups, synthesizes ideas, create consensus, and communicate biblical perspectives about unity, justice, diversity, equity, and inclusion that uniquely fit the culture of VCS.

He joins the senior leadership team under Superintendent Jerry Merza after a thirty-year career as an education leader and educational technology consultant with K-12 school districts, colleges and universities, nonprofits, and businesses in California, U.S., El Salvador and the Philippines. Dr. McGriff previously served as the Professor-in-Residence at the Krause Center for Innovation at Foothill College, Los Altos, CA (2008-2016). He was an assistant professor in the graduate program in instructional technology at San José State University (2002-2009). In that role, he mentored and led a cohort of Valley teachers through their master’s degree program on the VCS high school campus (2005-2007).

“Dr. Steve,” as he is often called at Valley, is a native Californian raised in the Evergreen/East Side of San Jose. He holds a doctorate in instructional systems from The Pennsylvania State University, a master’s degree in instructional technology from San José State University, and an undergraduate degree in art design from Stanford University. He currently lives in San Jose with Gloria and their three young adult sons. Steve and Gloria volunteer at the House of Grace with CityTeam Ministries to support women in recovery. He also enjoys walking local parks, gardening, practicing yoga, inspirational blogging, and researching his genealogy.

For more information, please contact us—we are always happy to hear from our community